We’ve been off the ship and ensconced in Singapore since yesterday morning. Love this city. It’s gorgeous, fun, delicious, and unsettling. If democracy is supposed to be so great, how come we are all messed up and they aren’t?

But this is a food blog, so I’ll stick to what we had for dinner. I still have earlier posts to write but last night’s dinner is what’s on my mind so that’s what I am writing about.

Although I will say we had a fantastic day — and pretty darn good lunch — in the Gardens by the Bay. If you go to Singapore, it’s a must-see.  Here are some pics to tease you.


But back to food.

You can eat extremely well in Singapore in multiple ways. You can dump a fortune on fancy Michelin-starred cuisine, much of which would be at home in any country, but really, why bother?
Or you can sit down in the restaurants in Little India or Chinatown or Kampong Glam, and eat the ethnic heritages of today’s Singaporean people.  We ate in Little India for lunch and had a wonderful meal. Jerry got his fishhead curry, a dish he decided last time we were here was the best thing he had ever eaten. He’s still in love.


You can also eat in the hawker centers — organized and regulated  groups of food stalls who sell every good Singaporean delicacy under the sun.
You can, of course, go to the markets and buy your own fresh ingredients to cook — if you have a kitchen.

We do not have a kitchen, so what I was looking for was someone who would use traditional. Singaporean flavors as a culinary playground — but push the envelope a little bit. What I found was Wild Rocket.

It was beautiful. Located in a funky hotel called The Hangout in Mount Emily (“No frills, just fun!”), it was full of intricately interlocked wood blocks and spare lines. Each table had a drawer for each diner where all the silverware was stored –brilliant concept!! 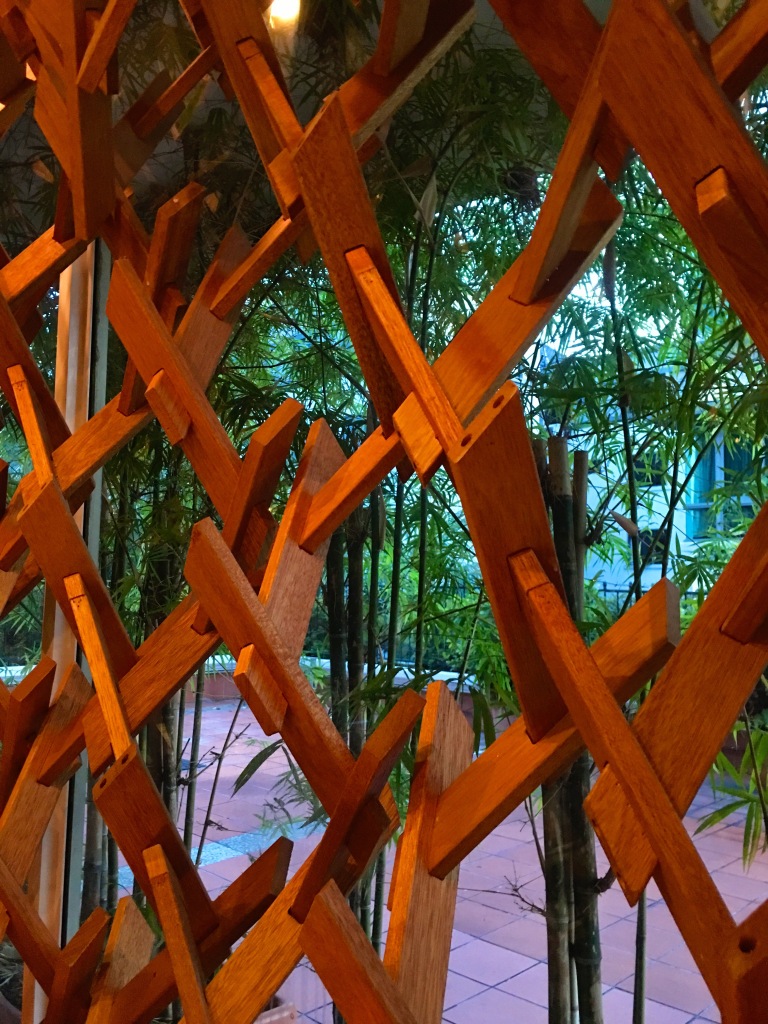 But the food was the draw. Beyond fantastic, it used the entire palette of Asian flavors to create a series of mind blowing dishes. 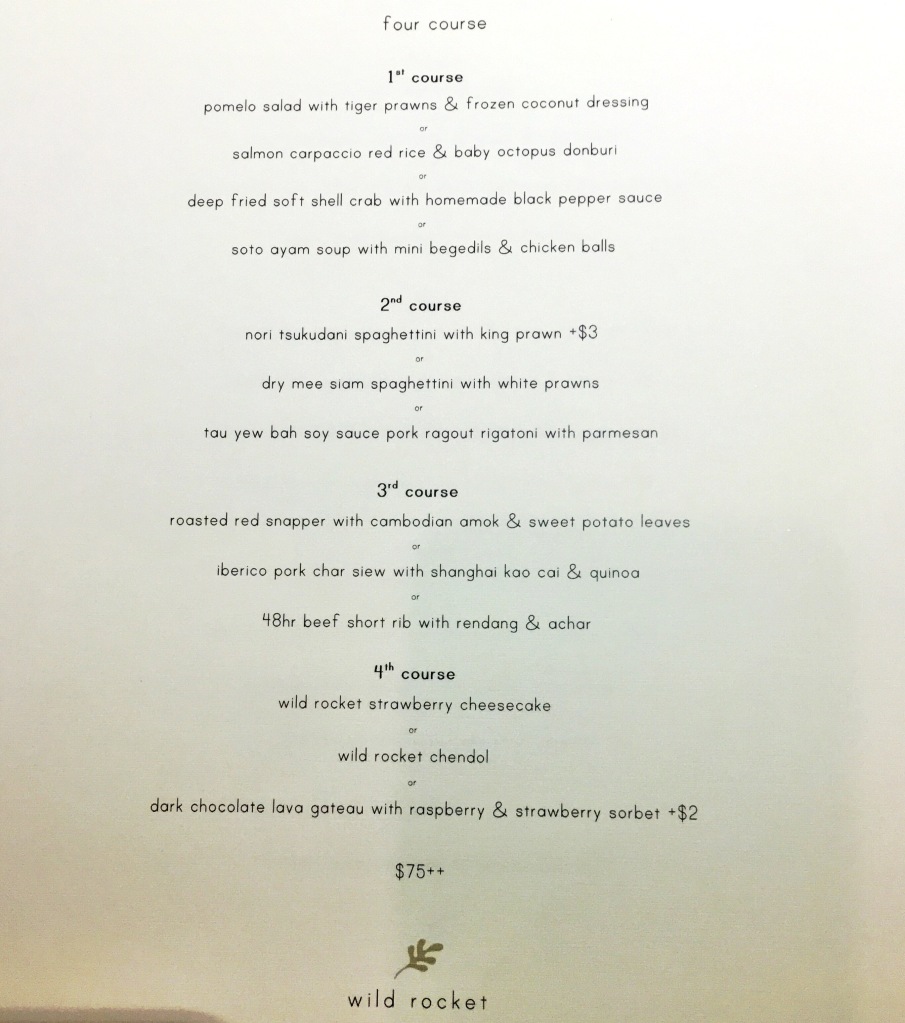 You could tell it was going to be different from the tiny round brioche rolls with green onion they served with olive oil to start. Yummy.

I had the pomelo salad — a variation of a salad I’ve eaten in Thailand many times. It commbined sharp and tangy citrus, sweet prawns, crunchy peanuts and dried shrimp, and lots of fresh mint and cilantro. Where it went off the rails (in a very good way) was with the scoop of frozen dressing. Basically a scoop of coconut ice cream with a hint of fish sauce (trust me here) it was amazing stirred into the other ingredients. Just outstanding.

Meanwhile Jerry and Tom had the soft shell crab with black pepper sauce, a house specialty. I am guessing it is a play on the chili crab that the country is famous for. The sauce was killer. Gale had fragrant chicken soup with chicken meatballs. Wonderful.

I followed that with a spicy spaghetti I can’t begin to describe because I don’t have the culinary language. Called dry mee siam spaghetini with white shrimp, it was spicy and hot with a whiff of the funk of fish sauce. It was really, really good, whatever it was.


Snapper was next, perfectly cooked with a yellow Thai type-curry and served with tight and tidy rolls of sweet potato leaves.
And, finally, one of the best desserts of my life. Coconut ice cream, made with coconut milk, not dairy, and a brilliant drizzle of date syrup. Fabulous, fabulous, fabulous.
I could eat it forever.